A Visit to the Gabba

So, while I was in Brisbane, Australia, I decided to check out the game of Cricket. I found there were two sporting complexes in the area that weren’t too far away from where I was staying, so I went to the one named Gabba, also known as the Brisbane Cricket Ground. Cricket is the only sport played there. You can also watch the soccer and rugby union play or enjoy a game of Australian rules football. In fact, the Brisbane Lions AFL team and the Queensland Bulls both play at the Gabba. 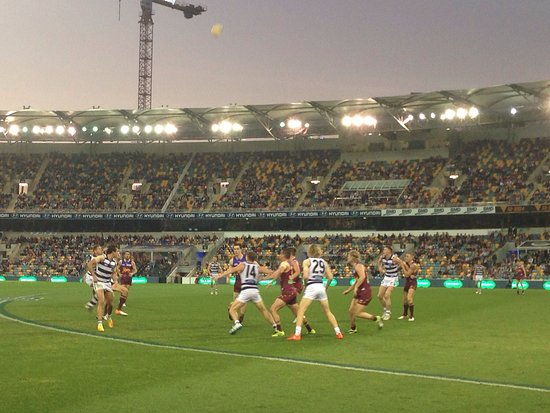 Before the game, I talk a little bit of a history tour of the Gabba. The land was originally designated as a site for cricket back in 1895. In fact, the first cricket match ever played there was between the press and the parliament in December 1896. Up until 1931, though, no official teams played regularly here. These days, though, the Gabba is one of the few premier venues in Australia for cricket. Surprisingly, the Gabba is also used occasionally for other sports such as Greyhound racing and cycling. This place actually seats around 42,000 people and is quite the interesting concrete Colosseum.

I was pretty stoked about being able to attend my first cricket game in Australia. Unfortunately, the day was a bit overcast and, thanks to intermittent rain showers, the game had to stop a few times. The Sri Lankans team was playing rather slow that day, and the rain made the game even less enjoyable. The drinks were nice, though, and I enjoyed learning more about the area and the game of cricket. The Australians won the game in the end, so the mood of the crowd picked up pretty nicely.

All in all, I enjoyed my time watching my first cricket game at the Gabba. It’s not something I want to do regularly when I visit, but at least now I can say I have went to a cricket game.

PostPress, a WordPress Theme by @aicragellebasi